Lose Fewer Brain Cells at the Bar: Where to get Your Trivia On in Green Lake

Geeks Who Drink organizes trivia nights all around town – image from GeeksWhoDrink.coim

Planning on a pub night? Let’s face facts: your brain cells may be facing some collateral damage as you sample the craft beers and ciders. So why not balance the odds and give your brain a workout at the same time? Bonus: you’ll feel smarter as the night goes on.

If you’ve never tried one, teams with names like “If I Was DNA Helicase I’d Unzip Those Genes,” or “The People’s Democratic Republic of Awesome,” compete in answering questions led by the “quiz master,” who creates the night’s theme and researches the answers. You can go solo or as a duo, but a larger team (the max is usually six) is more fun and, of course, offers a deeper knowledge base. Cost is usually minimal or free, and prizes can be the pot or gift certificates for the bar in question, or of course, more beer.

The Park Public House, which started its eight-round trivia nights led by Geeks Who Drink about a year ago, says it sees an average of 15 trivia teams nightly, and holds occasional fundraisers for organizations like PAWS, the animal rescue group.

Fix Coffeehouse’s trivia nights incorporate video and charades into the game, and are designed by a lone triviamaster named Sam, manager Jason Studstill said. “They’re extremely popular. In general the pot is around $80.” (The fee is $2.00)

Here’s where you can scratch that “Jeopardy!” itch locally:

Rotating hosts, so format may vary.

Prize: $40 Gift certificate to the bar

One round, 25 questions, including one Leny’s question of the night, along with additional bonus points. Free to play, with gift certificates and/or beer swag for the top three winning teams. Trivia hints provided throughout the week on the Leny’s Facebook page.

A Geeks Who Drink quiz. Eight rounds of eight questions each, including a music round, an audio round, and a picture round. Free to play, with gift certificates for the winning team and five bonus questions per night for free pints of beer.

Five of the eight themes for the night are teased on the venue specific Geeks Who Drink mailing list (sign up on their website), and the results for each quiz are posted the next day on their blog.

Don’t see the day you need here? You can find quiz nights in surrounding areas on http://seattle.quiznight.net/map/ 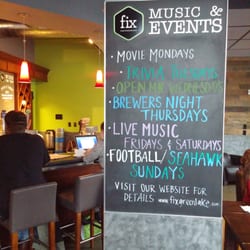