Opting for an unconventional theme of “Romance Blossoms,” the Northwest Flower and Garden Show opened Wednesday at the Convention Center to a host of hot-and-heavy hort-lovers.

Arriving soon after the doors opened we got the last parking space in the city at least a half mile away. Once inside, trying to read the plant labels on the gold-winning display garden was like trying to get to the Mona Lisa. Human traffic did lighten up in the afternoon, as the emailed FAQ promised it would.

The draw for these crowds… well it’s winter! Flower shows are a perfect place to find creative inspiration to spark ideas for your garden, whatever your taste and whatever the size of your growing space. You can check out the display gardens, attend free seminars, and shop for the latest in everything from trowels and tchotchkes to live plants. And it’s winter.

This year the display gardens’ focus seemed to be less on working in the garden and more on lounging in it, which makes sense given the theme. (Four out of five relationship experts agree that lounging is more romantic than weeding, in most cases.)

Accordingly, continuing the indoor-out merger trend in home design, there are quite a few fantasy rooms and getaways, water features, hammocks, arbors, pergolas and gazebos, which just make you want to crawl in for an indefinite period of time. In fact, time would ideally be suspended.

For example, Treeline Designz’ Side by Side creates a “lovers’ platform” over water which leads to a canopied modern hammock with red pillows.

One lovely interpretation of the theme involves a full moon and some owls guarding your rendezvous, complete with a Scandinavian Lusthus gazebo (translates as you would guess: lust house). This was created by three designers in the Washington chapter of the Association of Professional Landscape Designers.

A stunner called “Love the Space You’re In”  by Susan Browne Landscape Design creates a lilting tune of orange, white and blue that stirs the heart.

The “Romance of Steampunk” by Whitby Land Care, showcased gears and recycled elements amid a Victorian folly.

Some of the designers flirted with rather than embraced the romance theme. Not one opted to, for instance, recreate Romeo and Juliet in succulent topiaries. Last year there was a shed outfitted for Zombie attack – a sequel using this year’s theme could have been really interesting. That said there were some breathtaking vignettes and hey-what? moments. Like that fountain is – a tuba!

For pure flower power, the Washington Arboretum’s homage to its Azalea Way is transporting and packed with color.

Edibles were featured, in pots and, in a nice touch, planted decoratively in narrow beds (a nice change from rows in boxes), as in these Cor-Ten planters in Oliana’ Gardening’s design.

Herbs peek out from under hyacinth in this display garden from Oliana. Credit: Oliana Gardening.

Succulents were wedged into every kind of container or wall frame, and air plants hung from rafters in many sales booths like airborne jellyfish. Hardscape using eco-friendly elements, like gabion walls were (wire baskets filled with stones or bottles) popular.

Edgeworthia, an up-and-coming shrub popular last year, was featured in several gardens and nursery booths. A daphne relative, it’s a stocky multi-stemmed mounder with cool gnarly branches tipped with yellow- or orange-tinged fists that – surprise – open into clusters of deliciously fragrant blossoms. I bought one at a nursery last year and can’t wait for its first bloom.

Tickets can be purchased online or at the door. Psst – half-day afternoon tickets are only $10. These are for entry after 3PM on Wednesday Feb. 11th to Saturday Feb. 14th, and 2PM on Sunday the 15th and are only sold at the show.

This annual event is a bargain-hunter’s dream. It’s so popular, in fact, that some folks pre-shop to map out their attack strategy on opening day. The deepest discounts (40%) are on bare-root plants, which look like sticks in sawdust but are actually raring to grow. Without soil, stock is easier to handle and plant, and establishes more quickly without the “transplant shock” potted plants experience.

Species sold bare-root include fruit trees and bushes, roses, dogwoods, quince, willows, witch hazel, and hydrangea. However, you can also get 25% off all outdoor potted trees, shrubs and perennials.

Seasonal color is on sale too. Photo, Erica Grivas 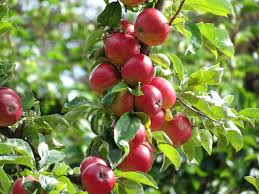 The promise of bare-root apples. Photo:freewallphotos.com