At the Dog Park: Teaching Pack-Mind for Humans

You might never notice the Woodland Park Off-Leash Area unless you’re a nearby owner of a restless dog. Then you make a point to find it three days a week – minimum.

Dog parks are a tricky fishbowl of energy (both canine and human).  On the best of days, they are the happiest places on earth, because who is happier than a happy dog?

Other days, dogs given free rein to play may face macho jerks, agoraphobics or toy thieves. Imagine being trapped in the office all day, following all the boss’ rules (even the dumb ones), then you go play hoops or dancing and some loudmouth gets all in your face? Grrrr.  Space – a built-in pressure valve – helps diffuse tension, like at colossal Magnuson Park. How does tiny Woodland Park manage?

A one-acre wedge tucked amid trails between the Lower Woodland tennis courts and picnic shelters, it’s nearly all hill, but the plan encourages circulation – a must for dogs with pent-up energy. A clearing at the base offers either a spiraling path upward or a ziggurat of steep timber steps. At the crest, a mini mesa offers a hose/washing station and benches, which attract the bipeds. A close-knit cluster of mature maples provides crucial drizzle protection as well as summer shade. 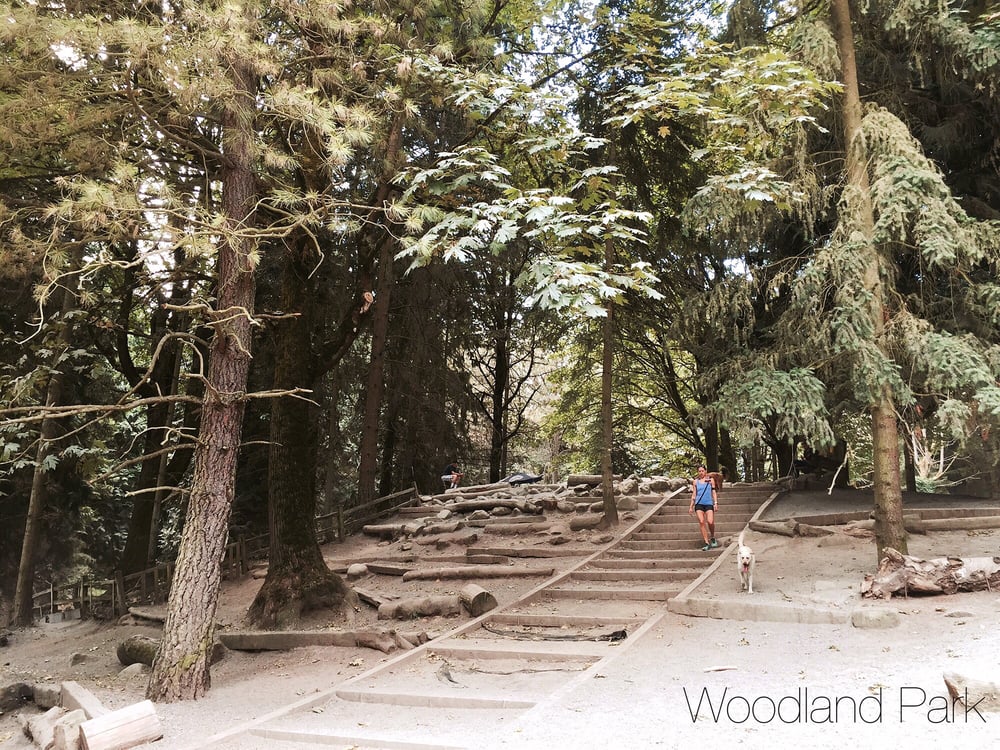 The park is operated through COLA, the Citizens for Off-Leash Areas, under supervision of Seattle Parks, and despite its excellent layout and location, suffered in popularity for a while. For years it had a reputation for being a Woodstock-worthy mud pit except during summer – when it became a lung-threatening dust bowl. The last few years have seen significant changes, starting in 2013 with regular volunteer work parties to spread drainage-giving gravel to banish the mud, rake fallen leaves and improved fences and steps. Park Steward Charlotte Bontrager credits the strong sense of community of the park-goers.

“The results have been tremendous,” says Bontrager.

“Most of our volunteers decide to help out on the spot, not having realized we were having a work party that day. We average 20 people per work party, or 38 hours of labor donated per month. I believe that with the generous help (both in labor and funds) of our community of volunteers, along with Parks Department maintenance support and COLA financial support, we have turned Woodland Park into one of the nicest OLA’s in the city.”

Bontrager launched a new initiative this year. Called WOLF (Woodland Off-Leash Area Friends), it is a coalition of dog care providers who use the park and encourages active participation in the culture and care of the park . Bontrager has been a professional dog walker herself since 2002.

“…we practice a community consciousness in which we contribute to the park through our labor and funding. As members of WOLF, we remain sensitive to the presence of other individuals and their dogs also using the park by modeling open communication, cooperation, and a general attitude that’s positive and friendly. We strive to foster an atmosphere that is safe, clean, and fun for all.

According to the policy statement, 90% of member dues go to park maintenance, 10% to COLA – yearly dues range from $100-$300 per year depending on usage. Members are licensed and insured, agree to adhere to Seattle Parks guidelines, attend work parties and leave the park cleaner than they found it each visit. Signs posted at the gates feature the amount raised by WOLF – currently $1,670.

Oh, and those benches clustered at the top clearing? They were spread out this fall – to encourage circulation of a human kind –  so the two-legged get a better look at what’s happening with their four-legged friends, rather than their Facebook feed.  There’s a lot of thought going on behind this little park. Green Lake – and its dogs – are very lucky.

Seattle overall, despite its rep for doting on dogs, lags behind comparably-sized dog-loving cities. However, on Jan. 4, Seattle Parks and Recreation plans to release a Strategic Plan for People, Dogs and Parks to improve resources for dog owners, and public comment will be open through Jan. 22.

Check out this gallery for more Woodland Park dogs: