Green Lake, circa 1900, prior to the development of the park. Photo courtesy of MOHAI. Used with permission.

The Green Lake neighborhood was settled in the late 1800s as a quieter retreat from a growing downtown. Its first residents were akin to homesteaders, logging the area and gradually developing homes into a small neighborhood by 1900.

Courtesy MOHAI, PEMCO Webster & Stevens Collection
The epicenter of the neighborhood is Green Lake Park. The park was created in 1905, and designed by the Olmstead Brothers landscape architecture firm as part of the city’s park system master plan. The neighborhood rapidly developed in the early 20th century into a bustling “suburb” close to Seattle.

Courtesy MOHAI, Seattle P-I Collection
Over the years, the area has seen an electric railway, model boats, hydroplane races, and performances by the Aqua Follies,  at the Green Lake Aqua Theater.

Courtesy MOHAI, Seattle P-I Collection
Today, the neighborhood has over 10,000 residents, 2 schools, and dozens of businesses. Green Lake Park is one of the most popular in the city.

Diving Into The Weekend

Once a year the Friends of Seattle Olmsted Parks hosts a guided tour of Green Lake Park, so mark your calendars for Saturday July 15. History buffs know that Green Lake was designed by the Olmsteds, the same architects who designed Central Park. To find out more on the Olmsted influence of Green Lake Park you should read our previous post AND sign up for this annual walking tour hosted this Saturday.

The two hour walking tour will include photographs, plans and other images to show landscapes and the changes to the park overtime. The tour will circle the lake, so bring your walking shoes (and maybe a sun hat).

It is free to the public and appropriate for all ages.

Here’s the details: July 15 at 10 a.m. Meet at the NE corner of the Green Lake Community Center

#TBT to this undated postcard.

Today’s TBT may not have seemed like that long ago for some of us. Originally aired in 1992 on Almost Live, Bill Nye’s character Speed Walker visits Green Lake to stop an espresso thief.

This is a job for … Speed Walker!

Evans Pool: The Story Behind How Green Lake Pool Got its Name

When I first moved to Green Lake I had a heck of a time remembering the name of the pool. (I won’t leave you in suspense if you don’t know… its Evans Pool). But I kept googling Green Lake pool when I tried to find out the pool hours and classes. While most of the other pools in the city are named after the location Queen Anne Pool, Meadowbrook pool etc, Green Lake was not. Hmm… very mysterious.

Little information is on the Evans Pool site about its history. So we dug into the Seattle Municipal Archives and found that the pool, which was built in February 1955 was named after two Recreation Directors of the Parks Department, Ben and Lou Evans.

According to the Seattle Municipal Archives “Over 50,000 signatures were gathered in 1952 in support of a pool at Green Lake. Voters approved money for the Green Lake pool in a Park Department bond in 1952 and ground was broken in 1954. Designed by Lamont & Fey, unique features of the pool at the time were port- holes allowing underwater viewing of swimmers.”

Recently the University of Washington Libraries Special Collections released some of their historic menus online and several include Green Lake. The menus give us an interesting glimpse into Green Lake life several decades ago. While there are a few from the 1980s – like Jake’s Green Lake and Green Lake Grill, two from the 50s and 60s caught our eye.

Several things struck us about this menu, like coffee in Green Lake for 10 cents, grilled halibut for 85 cents and a Sweden Freeze (I don’t know what that is, but I’d like one.) What a time to live in Green Lake! And did you see the hours? Open until 12 a.m. The 50s were a rocking time for Green Lake. The Green Lake Bowl Cafe was on Ravenna Boulevard, which now is the home of Parks’ Pharmacy.  An interesting side note, according to a city website the Green Lake Bowl’s bowling alley floors are still intact at the Pharmacy today.

Okay, next menu – 10 years later and on the other side of the lake was a restaurant called Jerry Choi’s Cantonesia.

Jerry Choi’s Cantonesisa was located at 7850 Green Lake N, which is now the home of Duke’s Chowder House. An obituary for Jerry Choi says he owned the restaurant in Green Lake for 17 years. The 1960s menu features several interesting items, including Shark fin soup (now illegal in Washington state), a 10 course dinner cost $5.50 per person and an extensive 6 page menu of items starting at 90 cents.

To see the full menus for these and other Green Lake establishments, go to the University of Washington Digital Collections website.

And if you have any historic menus, let us know. We’d love to see them. Please share them here!

Sixty two years ago (this week) Evans Pool was dedicated as part of Green Lake Park. It cost $236,286.

According to the Seattle Municipal Archives “In 1955 (almost to this very date) Evans Pool was dedicated by then Mayor Pomeroy, Park board members and Park Department employees along with Roosevelt and Lincoln High School Moonlighters Swing Band. Among other events at the pool opening was a comedy diving exhibition by the Husky Swim club. En- trance fees when the pool opened were 10, 25 and 35 cents for children, youth and adults. Over 50,000 signatures were gathered in 1952 in support of a pool at Green Lake. Voters approved a money for the Green Lake pool in a Park Department bond in 1952 and ground was broken in 1954. Designed by Lamont & Fey, unique features of the pool at the time were port- holes allowing underwater viewing of swimmers. The pool was named “Evans Pool” in honor of Ben and Lou Evans, Recreation Directors of the Parks Department.”

We recently ran across these Christmas photos taken at the Green Lake Community Center (then called the Green Lake Field House)  dated December 8, 1961. The 57 year old photo shows children seeing Santa arrive and later lining up to chat with with his jolly self at what was described as a Engineering Department Christmas party. Notice the kids pointing and clapping as Santa makes his grand entrance into the room. While the styles in this photo have changed from today the excitement of seeing Old Saint Nick certainly hasn’t.

A bit of Green Lake folklore made its way onto our desk and while we’re not one to encourage the rumor mill, we were intrigued!   Apparently, and we stress “apparently,” rumor has it that the white hair, white suited, black bow tying Colonel Sanders perfected his famous “finger licking good” chicken recipe right here in Green lake!

A bit of sleuthing revealed accounts that the culinary wiz actually did spend some time here in Green Lake.

Here’s the scoop: Legend has it that the famous Col. Harland Sanders was once a short order cook at former Twin Teepees, the well-known establishment that was destroyed by a fire and demolished in 2001.

In Walking Seattle, by John Owen, the author flushes out the juicy details:

Walter Clear, the owner of Twin Teepees “met another energetic restaurateur who had fallen upon hard times… He offered his new friend (then known as Harold Sanders)… a temporary job as a cook at one of his downtown Seattle restaurants. ” Issues quickly arose when Sanders ignored his duties and was found up to his elbows brainstorming his ‘finger lickin’ good’ recipe. (We just had to include this!) Ones continues,  “To keep peace in the kitchen, Clark moved his friend to the Twin Teepees, where the man’s fascination with herbs and spices continued.”

After 10 months in Seattle, Harold moved back to Kentucky and began to call himself “Colonel Sanders.” Believe it or not! Did he develop his famous recipes just to the North of Green Lake’s shores? We may never know. 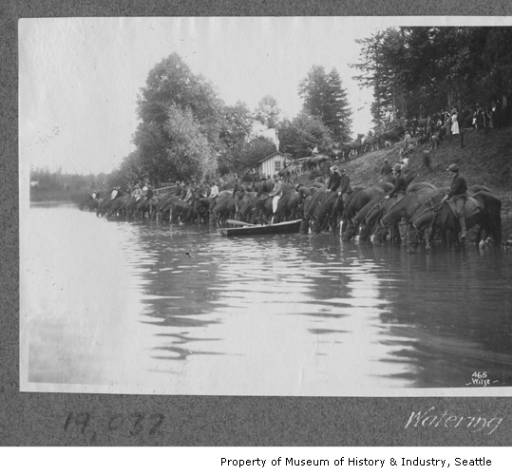 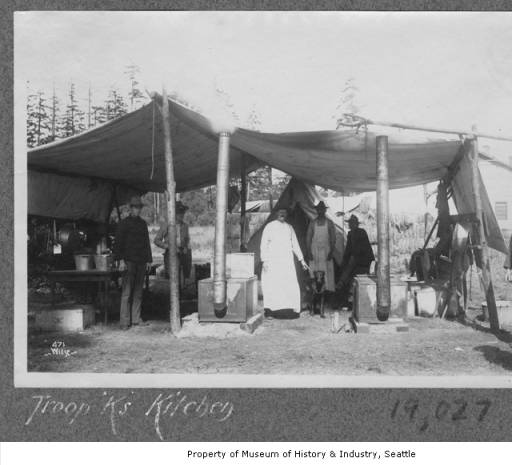 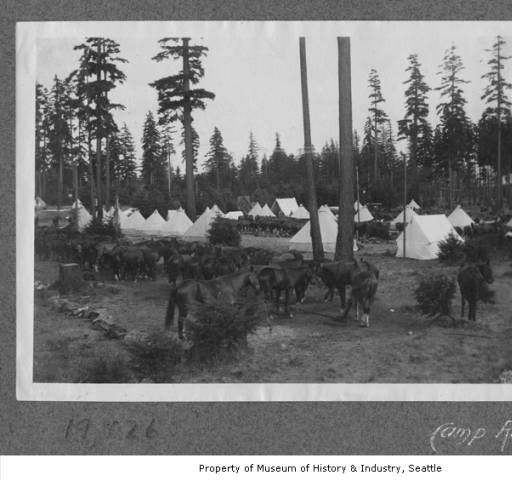